UNBLOCK ANY WEBSITE! With A VPN Surf The Web Anonymously Find out More

Nowadays slow motion videos are not restricted to high-end video cameras. You can simply get this feature on your phone by just downloading a single app. You have an Android Smartphone, right? If you wanted to give your favorite video into slow motion touch, then you will be happy to hear that they are lots of Android apps available for your Smartphone. By using those you can easily create a slow motion video without any hesitation.

Why everybody loves slow motion video, and it is attractive than any other regular one? You can ask me the question. Slow motion video makes some rare view what is very fun to watch. Don’t try it yet? Then you must try once to see how wonderful it is! It will be a whole new experience for you. A fascinating part of the slow motion video is you can slow down the video with just a visual instruction, what makes it more interesting.

I want to start this list with Video-Shop. It is fully featured editing (video) tools for Android Smartphone and has so many useful features. The users even can edit the video in real time what makes it even more attractive. Video-shop is also ad-supported. Very easy to use interface for the users, you can call it totally user-friendly. All you have to do is cut, copy, paste and combine the video the way you like. There are lots of build in special effects or songs for making your video more beautiful.

If you are a social person, then this software can be very handy. You can edit your YouTube video with this free software. It will save your tons of time and effort what most of the people waste by sitting in front of the computer and editing the video again & again. That is unnecessary, as you can do all this by following Video-Shop’s easy to use features. Also, you can share your video on your favorite Social Media platform like Face book, YouTube, twitter, etc.

In the real time mode, this app will allow you to slow down your video or fast-forward it using a horizontal slider and judge the improvement in real time. You can decrease the speed into 0.1 xs and also increase it to 4 xs.

Video-shop has smart features like adjusting the display. You can increase or decrease the contrast, brightness or Saturation. Even you can keep it in auto mode where the software itself will improve the brightness or contrast after considering the current situation of the video.

Slow Motion Video FX app made for creating excellent slow motion video or fast motion video, by adding some fantastic effects. It is an ad-supported app, but the good thing about this app, there is a pro version where there will be no ads at all. In most apps, which have a paid version, they will not offer you the entire feature and in video editing or image editing software they give an annoying watermark. However, in this case, it is entirely different from others. As in free version, there will be no watermark at all. The only difference between the free & paid version is ad-removing function.

The auto saving option made it more attractive for the users. Also, it has a social sharing option just like Video-Shop. That means after creating your video you can directly share it with a single tap in your favorite social media platform. Posting your video on Instagram, Pinterest, Linkedin or Facebook is like a piece of cake.

Recording in a mute version adds some more excitement to this app. Sometimes we capture or shoot a video in local or crowdie place. So recording the events without any sounds give us significant advantages. Add some quality background or voice over with the video later. You can do all this with this single app. 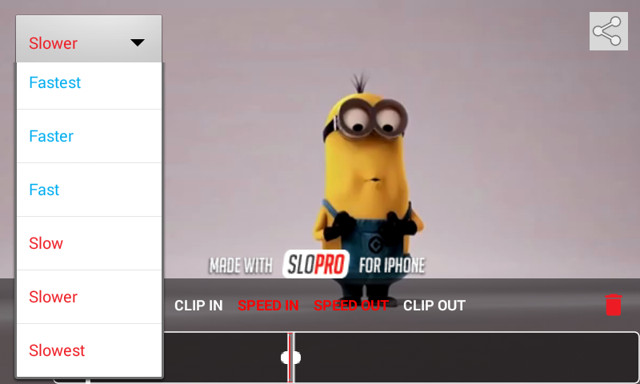 This app supports all kinds of Android device. It is very light software and runs smoothly without any breakdown. The people using low-end Android device will be pretty much satisfied with its interface. It has more than six different speed choosing option. So choosing the accurate speed will be much easier as it has several options for you. Also, you can create multiple video speed in a single video what is not still available in other Android Slow Motion Video app.

It supports recording through the headphone. This option is very fancy when you wanted to create video tutorials via your Smartphone. It contains 1000 fps super slow motion controller option and fast action with much more valuable features.

The camera interface is the same as your smart device. In most of the apps, you always heard bad things from the user that they have a high-resolution camera on their phone, but the quality of the Slow Motion Video created by the software is weak. However, in this case by using Slo-Pro you can create a high definition or HD video in no time.

You might have heard about KMPlayer. It is the best Slow Motion Video Apps having a built-in video player. Actually to be honest KMPlayer is a video player who has Slow Motion controlling option with an HD view. This app is called the best 30 apps available in play store. Google give them an award for being so consistent. In 2014 they received high praise from Google Play Store. Still, in 2016 they are one of the consistent performers when you are talking about slow motion video apps.

Floating Screen option will be rare sweet fruits for the people who like multitasking via their smart device. It supports cloud storage and Google Drive. This will allow storing all of your favorite video files directly into Google Drive or Cloud Store. Also, it has a fantastic option to play the saved files instantly in an offline mode. Control the speed of the video within 0.1x-4.0x and also enjoy the slow motion view in High Definition quality. Capture and relive the events by controlling its movement rate with your choice.

This app contains motion control option for the user. Fast & Slow Motion Video Tool is not just a motion controlling apps. It is much more than that. This Tool has much pleasant user interface than other regular slow motion Android apps. It is an ad-supported app what might be just a little annoying.

Unlike any other app we have previously discuss, it has more adjustable speed option. Creating your video in slow motion or fast forward mode between 1x-8x is unique. Isn’t it? This app will allow you to capture and edit the video within various speeds. So choose any of the options and create some lovely moments by using this app on your favorite Android device.

The best part of Fast & Slow Motion Video Tool is when you launch the software it will automatically display in the main user interface. That will save tons of your time. So it is very useful for the users. Also, this app is very easy to use. You can easily use the function and edit the video very quickly.

When you want to edit any video, just browse the video that automatically stored in the app and select it. Next, an option will pop up which particular area you would like to edit. Just play the video and edit in real time without any hesitation. Fast & Slow Motion Video Tool has a very attractive feature. It does not trim the part just like Video FX.

Next, I wanted to introduce Video Dieter 2. This is great video editing software for slow motion video creation. It is a professional tool come with lots of handy features. Video Dieter 2 offers motion controlling features with the power of slow down the events or fast forward it very quickly. You can target the video resolution and can create a superb video by customizing the resolution.

This app has the power of minimizing original size of the video without sacrificing any quality. What makes this software one of the best when your phone does not have sufficient space, but you still want to store more video. Still, don’t satisfy? You can compress the file and makes it even smaller and sent them to your friendly by losing fewer Internet data.

For the social people who like to connect with the social media platform. Video Dieter 2 has social sharing option for you guys. After editing a particular video, you can directly post them on your favorite social sharing sites like YouTube, Facebook or Linkedin.

However, it has a limitation. For unlocking the slow and fast motion option, you have to recommend a friend about this app and have to invite them. This app has some rear, slow motion controlling feature, which allows you to run 0.25 xs to 4 xs. Moving at the speed of 0.25 xs in video editing software is something, right?

Fast transcoding is another thing I like very much in this app. Video Dieter 2 can be the perfect choice for you when you do not like to use your computer for video editing. Also, it has real time mode what is useful when you are modifying a file or adding some effects to it.

At the finish line, I would like to tell you about the most exciting slow motion video apps for Android. Are you someone who browse Google play store more often? Then you might have encountered the Slow Motion Video Pro. Yes, I think Slow Motion Video Pro is the best app having lots of fresh and user-friendly features. In my points of view, I believe that it is better than any other Slow Motion Video Apps in Google Play store. This app has been created for making a video and changes its speed for having a more impressive view.

Create a video at your will and control the movements by slow down or make it lot faster with a little help from this app. Also, when you are editing a file, it automatically generates a new video file by keeping the original file. There is lots of editing option by using them you can create a lot more attractive video clip than ever before. Accelerate or slow down the video between 1xs to 8 xs and edit the video by adjusting the original speed according to the situation.

Apart from that, you can trim the video by cutting and pasting. Also, merge a couple of clip into the video with this app and made the moments more realistic. Add a background music or voice over and makes it even more fantastic.

Selecting the output file in customized resolution and speed is another excellent feature this app has for you. Create video, edit it and next you can share those file via social sharing website or apps. It is an amazing app you must try once.

Tech Geek Since 1985 - Cheif Geek at biglittlegeek.com since 2014, All around tech lover sharing great tips and advice online since 2004.